Eddie Ellner wears his journey through yoga like the baggy t-shirts that hang on him when he walks into class: as if it’s a part of him, well-worn, comfortable and an old friend. In some ways, the journey that now involves a stint as the owner of Yoga Soup and full-time teacher may seem unlikely for someone who wrote about the world of pro wrestling when he entered his first yoga class. While rumors abound that Ellner himself was a professional wrestler, he quickly dispels the myth. He worked in New York as a writer for Wrestling and Boxing magazines. There may be more similarities between wrestling and yoga than one would suspect at first glance. Ellner is well aware of the irony of writing seriously about the persona of a professional wrestler — in many ways, its not unlike the personas we all try on, or pull over our head like the clothes we don as we start our day. Playing with personas is a practice he engaged in as a writer: “I wrote under different personas, I liked being the voice of the strong heroine who wins out over evil male dominance.

Eddie provides a whimsical journey of classic and familiar yoga poses, with a few comic surprises like jumping around the room fencing style then swinging your hips to the beat of raucous pop music before diving into a vinyasa (moving with breath) that combines breaststroke while balancing in standing half moon in one sweaty session. It’s not all nightclub, though, as the photo of Sri Ramana Maharishi smiling above the stereo suggests. As Ellner begins the class, he talks, inspired by the headlines of the day, a giant Gucci store about to open for instance, leads to a rambling exploration of what we really need to buy, an opportunity to question priorities. A reminder of the importance of the time on the mat, no matter if it is spent jumping up and down or seriously approaching warrior two. 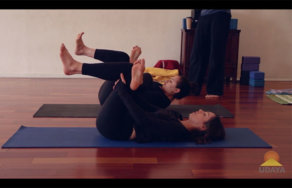 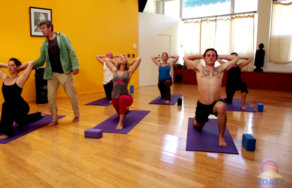 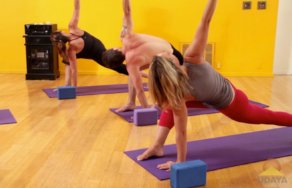 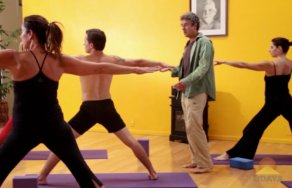 Truth of the Shape 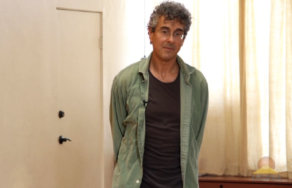 The Point of the Practice